Although today rosacea is well recognized as a common skin disorder that may affect tens of millions of individuals throughout the world, many centuries passed before it was identified as a distinct medical condition that requires specific therapy.

In contrast to teenage acne, rosacea usually first appears when sufferers enter their 30s and 40s as a redness on the cheeks, nose, chin or forehead that may come and go. (It may also first appear as early as the teenage years or after age 50.) As the condition progresses, the redness becomes more persistent and severe, and tiny blood vessels may become visible on the surface of the skin. Bumps and pimples may develop, and in advanced cases the nose may grow swollen from excess tissue. In some patients, the eyes may feel gritty and appear bloodshot -- a condition known as ocular rosacea.

The first person known to describe rosacea medically was Dr. Guy de Chauliac, a French surgeon living in the 14th century, according to a recent article in the European Journal of Dermatology by Dr. Jean de Bersaques. Dr. de Chauliac talked about "red lesions in the face, particularly on the nose and cheeks." He called the condition "goutterose" (French for "pink droplet") or "couperose" (now a common French term for rosacea).

Others referred to rosacea as "gutta rosa" (the Latin version of "goutterose") or "pustule de vin" (French for "pimples of wine"). Whatever the name, the condition was well-known and commonly "attributed to the excessive consumption of alcoholic drinks," according to Dr. de Bersaques. 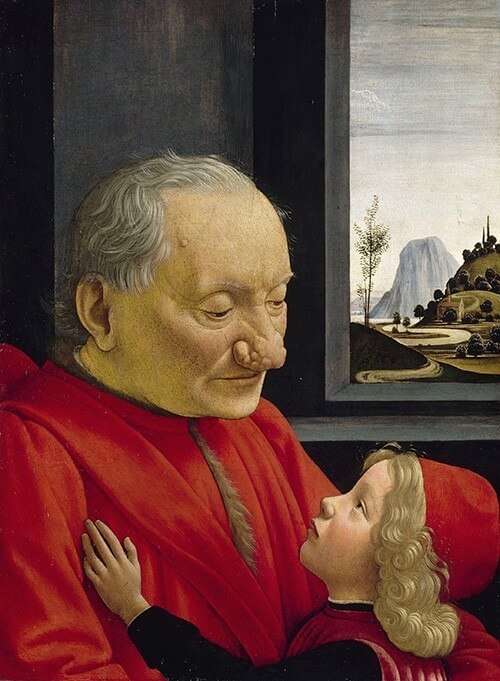 References to rosacea also did not escape early literature. Chaucer's Canterbury Tales and Shakespeare's Henry V include descriptions of men with red faces and enlarged noses. Artists through the centuries also have depicted rosacea in paintings of red faces and bulbous red noses. A painting in the Louvre, "The Old Man and His Grandson" by Ghirlandiao around the year 1480, is a well-known example.

Early treatments for rosacea ran the gamut from blood-letting from veins in the arm, forehead and nose, to applying leeches on affected areas of the face. The use of topical treatments in the form of salves was first referred to in the 16th century.

The first written reference to "acne rosacea" appeared in an English medical text by Dr. Thomas Bateman in 1812, and noted: "The perfect cure of acne rosacea is, in fact, never accomplished." Other 19th century references commonly listed rosacea among the different forms of acne.

Finally in 1891, Dr. Henri G. Piffard, a professor of dermatology in New York, called for distinctions among different forms of acne to more truly differentiate symptoms.

Today, dermatologists have learned that rosacea is a different disease from acne, and that therapy for acne can often make it worse. Although the precise cause of rosacea is still unknown, most experts believe it is a vascular disorder that seems to be related to flushing.

Research has also dispelled the centuries-old myth that rosacea is caused by heavy consumption of alcohol. While alcohol may aggravate the condition, the symptoms can be just as severe in a teetotaler.