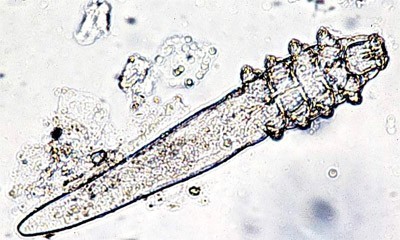 Microscopic Demodex mites are a natural part of the human microbiome — the ecological community of microorganisms that live within and on the body. Two species of Demodex are found in humans. Demodex folliculorum live in hair follicles, primarily on the face, as well as in the meibomian glands of the eyelids; Demodex brevis live in the sebaceous glands of the skin.

While Demodex folliculorum are found on the skin of all humans, they frequently occur in greater numbers in those with rosacea. There has been much debate as to whether their increased numbers are a cause or result of rosacea. However, evidence appears to be mounting that an overabundance of Demodex may possibly trigger an immune response in people with rosacea, or that the inflammation may be caused by certain bacteria associated with the mites.

Dr. Frank C. Powell, consulting dermatologist at Mater Misericordiae Hospital in Dublin, Ireland, noted that the mites are most plentiful in the same regions of the face that are most commonly affected by rosacea — the cheeks, nose, chin and forehead — and that large quantities of mites have been found in biopsies of rosacea papules and pustules.

According to research by Dr. Martin Schaller, assistant professor of dermatology at Ludwig-Maximilians University in Munich, Germany, a severe infestation of Demodex mites, known as demodicosis, may mimic the symptoms of rosacea but fail to respond to traditional rosacea therapy.13

Dr. Fabienne Forton, a dermatologist in private practice in Brussels, Belgium, suggested both an indirect and a direct role for the mites themselves in the development of the disorder.14 Skin infections and disruption of the skin barrier stimulate toll-like receptors to induce cathelicidin production, and the complaint of sensitive skin in rosacea patients often disappears when the number of mites is reduced to normal by treatment, she noted.

Demodex folliculorum's true connection to rosacea may be linked to a distinct bacterium associated with the mites, called Bacillus oleronius. In a study funded by the NRS, Dr. Kevin Kavanagh and colleagues at the National University of Ireland-Maynooth found that B. oleronius stimulated an inflammatory response in 79 percent of study patients with subtype 2 (papulopustular) rosacea.15

The investigators also noted that the bacteria’s potential role is supported by the fact that effective treatment for rosacea includes antibiotics that destroy B. oleronius, while antibiotics that are not harmful to these bacteria generally are not effective in the management of rosacea.

Staphylococcus epidermidis, another type of bacteria that normally exists on the skin, also may play a role in the development of rosacea. In a study of 15 rosacea patients, Dr. Margot Whitfeld and colleagues from St. Vincent’s Hospital, Sydney, the Monash Medical Center, Melbourne, and the Royal Adelaide Hospital, found pure growths of S. epidermidis in pustules from nine of 15 individuals with subtype 2 rosacea, compared with no pure growth in unblemished skin on the same cheek. Although only a small number of patients was studied, the increase was statistically significant.16

They also found a pure growth of S. epidermidis in the eyelid margins of four patients with rosacea. Despite the small sample, this was also a statistically significant increase compared with no pure growth found in age- and sex-matched control subjects.

The researchers noted these findings suggest that the presence of the pure growth of this bacterium may play a role in the development of subtype 2 rosacea. They suggested the often warmer facial skin temperature of rosacea patients was a possible factor in stimulating the pure growth of the bacterium to cause pustules, as demonstrated in previous research funded by the NRS. Helicobacter pylori, commonly associated with peptic ulcers and other gastric disorders, has often been considered a possible factor in rosacea in that the bacterium synthesizes gastrin, a hormone that causes flushing. However, recent studies have found no statistical difference in rosacea symptoms between treated and untreated groups, and further studies have found the prevalence of H. pylori to be similar in patients with rosacea as in those without the disorder.

In a small pilot study published as a letter in the Journal of the American Academy of Dermatology, about half of 63 rosacea patients also had small intestinal bacteria overgrowth, or SIBO.17 After localized treatment for SIBO, 46 percent of these patients reported marked improvement of their rosacea symptoms. The researchers noted that further study would contribute to an understanding of the potential significance of these findings.

See also: The Ecology of Your Face: Demodex, Rosacea and You