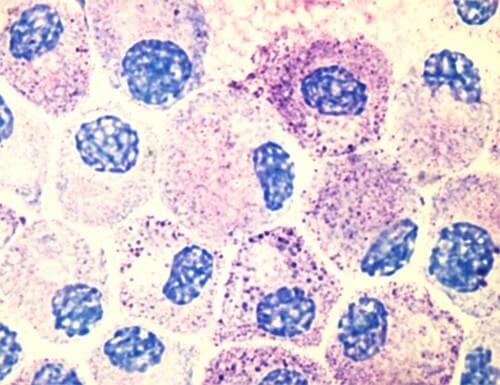 The innate immune system is the body's first line of defense against infection. It is composed of a complex of immune cells and molecules that trigger one or more defense responses when they encounter bacteria, viruses or other pathogens. According to recent scientific investigations, however, this protective process may be malfunctioning in individuals with rosacea.

One of the primary reactions caused by the innate immune system is inflammation. For this reason, researchers have investigated some of its components as potential causes of rosacea's signs and symptoms.

Cathelicidins are a type of anti-microbial molecule that is part of the innate immune system responsible for the body's ability to combat illness. These natural substances act by eliminating the presence of harmful bacteria and activating other parts of a complex immune reaction, and either irritation or infection may stimulate the production of these proteins.

In ongoing research funded by the NRS, Dr. Richard Gallo and colleagues at the University of California-San Diego have discovered that cathelicidins may cause inflammatory bumps and pimples as well as vascular effects such as flushing and the visible blood vessels called telangiectasia, all primary characteristics of rosacea. Cathelicidins were also found to be more abundant as well in a different form in rosacea patients, according to their study results published in the prestigious scientific journal Nature Medicine.1

The researchers believe this protective substance may be further linked to rosacea because cathelicidins and related biochemicals may be prompted by a variety of factors that also provoke rosacea flare-ups. These factors may include heat, exposure to the sun’s ultraviolet light and microorganisms such as Demodex folliculorum.

A recent NRS-funded study has determined that mast cells, located at the interface between the nervous system and vascular system, may be the "missing link" between rosacea triggers and inflammation.2

A team led by Dr. Anna DiNardo, associate professor of medicine of the University of California-San Diego, found that mast cells play a direct role in the activation of certain types of cathelicidins. Studying the process in mice, Dr. DiNardo's team determined that when exposed to a neuropeptide called PACAP, mast cells produce enzymes that trigger the production of cathelicidins. In mice bred to lack mast cells, this chain reaction did not occur. Dr. DiNardo's team is now conducting further NRS-funded research on whether mast cells and related enzymes return to normal levels if exposed to mast cell stabilizing agents.

The roles of a variety of related substances are also now under study. Dr. Curdin Conrad and colleagues at MD Anderson Cancer Center found that interferon and other substances may be involved in the development of the disorder.3 In addition, Dr. Ferda Cevikbas and colleagues at the University of California-San Francisco are assessing how a neuropeptide called PACAP may be involved with inflammation and cathelicidins.4 A study of specific cytokines — molecules that regulate the immune system — in ocular rosacea suggested the innate immune system may also govern the cutaneous effects of ocular rosacea, according to Dr. Edward Wladis of Albany Medical College.5, 6