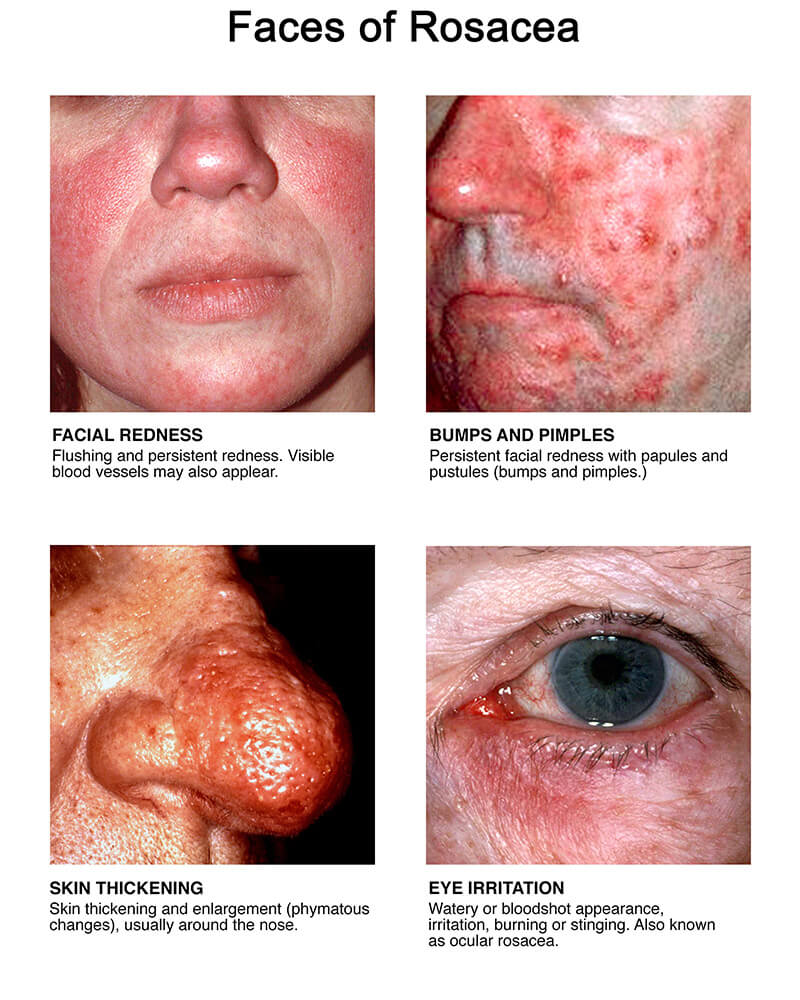 Rosacea (pronounced “roh-ZAY-sha”) is a chronic but treatable condition that primarily affects the central face, and is often characterized by flare-ups and remissions. Although rosacea may develop in many ways and at any age, patient surveys indicate that it typically begins any time after age 30 as flushing or redness on the cheeks, nose, chin or forehead that may come and go. Studies have shown that over time the redness tends to become ruddier and more persistent, and visible blood vessels may appear. Left untreated, inflammatory bumps and pimples often develop, and in severe cases — particularly in men — the nose may grow swollen and bumpy from excess tissue. In as many as 50 percent of patients the eyes are also affected, feeling irritated and appearing watery or bloodshot.

While the cause of rosacea is unknown and there is no cure, knowledge of its signs and symptoms has advanced to where they can be effectively controlled with medical therapy and lifestyle changes. Individuals who suspect they may have rosacea are urged to see a dermatologist or other qualified physician for diagnosis and appropriate treatment — before the disorder becomes increasingly severe and intrusive on daily life.

What Should I Look For?

Rosacea can vary substantially from one individual to another, and in most cases some rather than all of the potential signs and symptoms appear. According to a consensus committee and review panel of 28 medical experts worldwide, diagnosis requires at least one diagnostic sign or two major signs of rosacea.1 Various secondary signs and symptoms may also develop but are not diagnostic.

The presence of either of these signs is diagnostic of rosacea.

The presence of at least two of these signs is diagnostic of rosacea.

These may appear with one or more of the diagnostic or major signs.

In rare cases, rosacea signs and symptoms may also develop beyond the face, most commonly on the neck, chest, scalp or ears.

Although the cause of rosacea remains unknown, researchers have now identified major elements of the disease process that may lead to significant advances in its treatment. Recent studies have shown that the facial redness is likely to be the start of an inflammatory continuum initiated by a combination of neurovascular dysregulation and the innate immune system. The role of the innate immune system in rosacea has been the focus of groundbreaking studies funded by the NRS, including the discovery of irregularities of key microbiological components known as cathelicidins. Further research has now demonstrated that a marked increase in mast cells, located at the interface between the nervous system and vascular system, is a common link in all major presentations of the disorder.

Beyond neurovascular and immune system factors, the presence of a microscopic mite called Demodex folliculorum has been considered as a potential contributor to rosacea. This mite is a normal inhabitant of human skin, but has been found to be substantially more abundant in the facial skin of rosacea patients. Researchers have also discovered that two genetic variants of the human genome may be associated with the disorder.

Other recent studies that have found associations between rosacea and increased risk for a growing number of potentially serious systemic diseases, suggesting that rosacea may be an outcome of systemic inflammation. Although causal relationships have not been determined, these have included cardiovascular disease, gastrointestinal disease, neurological and autoimmune diseases and certain cancers.

To learn more, visit the Causes of Rosacea section.

How is Rosacea Treated?

Because the signs and symptoms of rosacea vary from one patient to another, treatment must be tailored by a physician for each individual case. Learn more about when to see a doctor.

A range of oral and topical medications may be used to treat the various signs and symptoms associated with the disorder. Physicians may prescribe medical therapy specifically to control the redness. Bumps and pimples often receive initial treatment with oral and topical therapy to bring the condition under immediate control, followed by long-term use of an anti-inflammatory therapy alone to maintain remission. Therapies specific for rosacea are now available in various formulations that can be selected for each patient.

When appropriate, lasers, intense pulsed light sources or other medical and surgical devices may be used to remove visible blood vessels or correct disfigurement of the nose. Ocular rosacea may be treated with anti-inflammatory medications and other therapy, and recommendations from an eye doctor may be needed. To view photos of treatment results, see Rosacea Treatment Photos.

Patients should check with their physicians to ensure their skin-care routine is compatible with their rosacea. A gentle skin-care routine can also help control rosacea. Patients are advised to clean their face with a mild and non-abrasive cleanser, then rinse with lukewarm water and blot the face dry with a thick cotton towel. Never pull, tug or use a rough washcloth.

Patients may apply non-irritating skin-care products as needed, and are advised to protect the skin from sun exposure using a sunscreen that delivers UVA/UVB protection with an SPF of 30 or higher. Mild or pediatric formulations are available for sensitive skin, and look for non-chemical (mineral) sunscreens that contain zinc or titanium dioxide. Rosacea patients should avoid any skin-care products that sting, burn or cause additional redness.

Cosmetics may be used to conceal the effects of rosacea. Green makeup or green-tinted foundations can be used to counter redness. This can be followed by a skin-tone foundation with natural yellow tones, avoiding those with pink or orange hues.

In addition to long-term medical therapy, rosacea patients can improve their chances of maintaining remission by identifying and avoiding lifestyle and environmental factors — often related to flushing — that may trigger flare-ups or aggravate their individual conditions. Identifying these factors is an individual process, however, because what causes a flare-up in one person may have no effect on another.

To help identify personal trigger factors, rosacea patients are advised to keep a diary of daily activities or events and relate them to any flare-ups they may experience. NRS members may obtain a Rosacea Diary booklet and other materials at no charge. Join the NRS today!