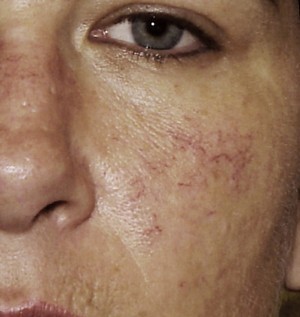 NRS-funded researcher Dr. Mina Yaar, Boston University School of Medicine, and colleagues found that exposure to the ultraviolet (UV) radiation in sunlight led to the production of vascular endothelial growth factor (VEGF), a substance that has been linked to the development of visible blood vessels (telangiectasia).11

They observed that the pigmentation in darker skin appears to make it more difficult for UV radiation to reach the lower layers of the skin. In such individuals VEGF would tend to be induced only in the upper skin layers and would not affect the blood vessels. In contrast, sufficient UV rays could induce VEGF synthesis in the deeper skin layers in fair-skinned individuals, who are more often affected by rosacea, potentially resulting in the creation of visible blood vessels.

Dr. Richard Gallo and colleagues at the University of California-San Diego have found that UV-B radiation exposure, which increases VEGF, appears to induce the production of new blood vessels in mice. The innate immune system also appears to be involved in UV radiation, they said, and future studies of chemical links between UV radiation and skin inflammation will be of great interest.12