Rosacea Awareness Month: Partner with Your Physician for Clear Skin

Thanks to the growing number of sophisticated rosacea therapies, the 16 million Americans with this potentially serious facial disorder who commit to partnering with their physicians can now expect to enjoy a clear complexion without the psychological and emotional burden of its unpredictable and embarrassing effects. The National Rosacea Society (NRS) has designated April as Rosacea Awareness Month to educate the public on this life-disruptive, red-face condition and to urge those who believe they may have it to see a dermatologist for diagnosis and the best therapy for their individual cases.

“We’ve come a long way,” said Dr. Hilary Baldwin, associate professor of dermatology at Rutgers Robert Wood Johnson Medical School. “Rosacea is a complex disease with a broad range of conspicuous manifestations, but we now have the tools to help patients achieve freedom from its potentially debilitating impact on appearance.”

What is rosacea?
Although it can develop in many ways, rosacea typically first appears after age 30 as a redness on the cheeks, nose, chin or forehead that comes and goes, and might be mistaken for a sunburn. Unfortunately, the redness tends to worsen and grow more persistent over time, and small visible blood vessels may appear. Without treatment, bumps and pimples often develop, and burning and stinging are common. In severe cases, the nose may become enlarged from excess tissue, and in many rosacea patients the eyes are also affected, feeling irritated and appearing watery or bloodshot.

Because rosacea’s signs and symptoms can vary so widely, the chronic disorder was initially classified into four subtypes – clusters of observable manifestations that often appeared together. However, with the explosion of rosacea research in the last 20 years, it has become clear that rosacea’s often fluctuating and seemingly unrelated signs and symptoms are part of a single underlying inflammatory continuum.

Rosacea is now identified according to its individual characteristics, or phenotypes – the major elements that may result from this disease process, which may appear in different combinations and at different times. This new targeted focus encourages consideration of the full range of potential signs and symptoms, better assessment of their severity, and selection of treatment that is more precisely tailored for each individual case.

Rosacea may be diagnosed in several ways: when either persistent redness of the facial skin or skin thickening (phymatous changes) are present; or when two or more other major signs appear together, including bumps and pimples, flushing, small visible blood vessels or eye irritation such as burning, stinging or redness.

Individuals with any of the following warning signs of rosacea are urged to see a dermatologist for diagnosis and appropriate treatment:
• Redness on the cheeks, nose, chin or forehead
• Bumps or pimples on the face
• Small visible blood vessels on the face
• Watery or irritated eyes 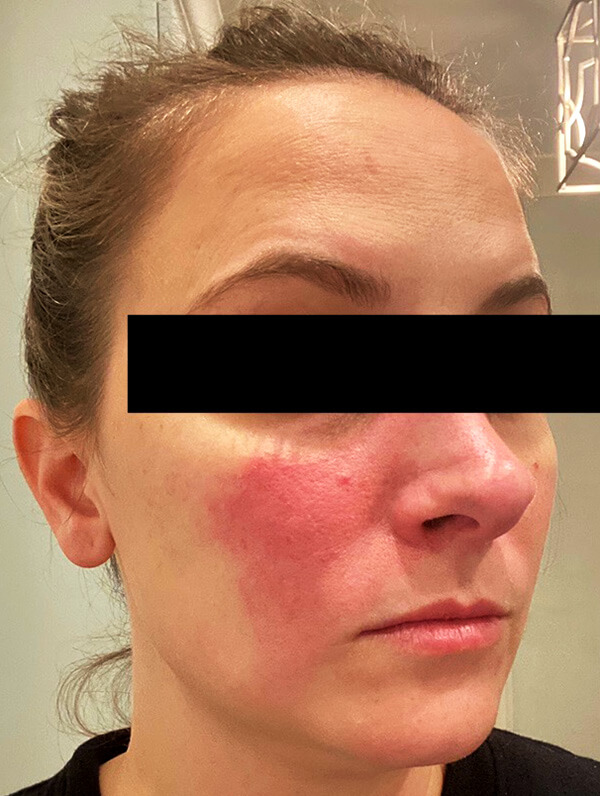 “Rosacea can be challenging, and individuals faced with its relentless and erratic outward appearance often suffer invisible effects as well,” said Dr. Baldwin.

In a recent NRS survey of 860 patients, 86% had experienced lowered self-esteem and self-confidence because of their appearance. Seventy-nine percent reported that rosacea had negatively affected their general outlook on life, and patients with severe symptoms were considerably more likely to report experiencing both a negative impact on their outlook (93%) as well as lowered self-esteem and confidence (94%).1

In addition, it has recently become clear that some effects can be more upsetting than others.

“Not all signs and symptoms are equal,” Dr. Baldwin said. “Even though any blemish that appears on the face is troublesome, substantial distress also appears to be caused by redness.”

A growing accumulation of data shows that persistent facial redness (erythema), often dismissed by physicians as a less serious phenotype, has a significant impact on sufferers’ quality of life, she noted, comparable to the impact of eczema, atopic dermatitis and psoriasis, according to data collected in NRS surveys as well as in burden-of-illness studies. In an NRS survey of 1,675 rosacea patients, 82% of those who suffered from erythema reported the condition had a negative impact on their general outlook on life, with the figure rising to 90% for those with moderate to severe redness.2

In an earlier study of 3,152 rosacea patients and 11,935 controls, a Taiwanese research team found that those with rosacea were more likely to be diagnosed with anxiety, depression, phobic disorder and obsessive-compulsive disorder, and had a small but statistically significantly higher rate of psychiatric disorders.5

Hope for sufferers
“In the past, rosacea may have seemed like an insurmountable burden, but fortunately today, we have the tools to counter rosacea’s negative effects on many fronts,” Dr. Baldwin said.

As well as targeting each of rosacea’s phenotypes, optimal therapy may keep the disease from progressing, as some medications appear to improve baseline redness over time, while others have been shown to help maintain remission of inflammatory bumps and pimples.2

An appropriate combination of therapies may also have a synergistic effect on improving other signs and symptoms. For example, one study found that combining a topical alpha agonist with a topical anti-inflammatory therapy achieved significantly better reduction of both redness and bumps and pimples when the two drugs were used at the same time.6

The key to success in achieving clear skin is partnering with your doctor to identify appropriate therapy and monitor its progress, Dr. Baldwin said. Physicians will design a treatment plan based on a comprehensive history of your signs and symptoms over time as well as any social, emotional and psychological effects. Doctors will also offer advice on the many potential trigger factors that may exacerbate the disorder, as well as appropriate information on skin care and sun protection.

“The good news is that, while managing rosacea is an ongoing process, effective treatment can not only achieve clear skin but improve psychological and emotional well-being,” Dr. Baldwin said.

For example, 71% of patients in the NRS survey1 said that rosacea therapy had improved their emotional well-being. Interestingly, patients who experienced mild rosacea symptoms and those who experienced severe symptoms found rosacea therapy improved their emotional well-being at a similar rate, suggesting that no matter the severity of the rosacea symptoms, medical therapy may help improve not only the appearance of the skin, but psychological well-being as well.

In April and throughout the year, people who suspect they may have rosacea can contact the NRS for more information, or visit its website at rosacea.org.