Where Is Rosacea Worst? Map Points to Northeast

Residents of New England appear to suffer the highest incidence of rosacea in the United States, while those in Hawaii may be affected the least, according to a geographic analysis of National Rosacea Society (NRS) membership data. 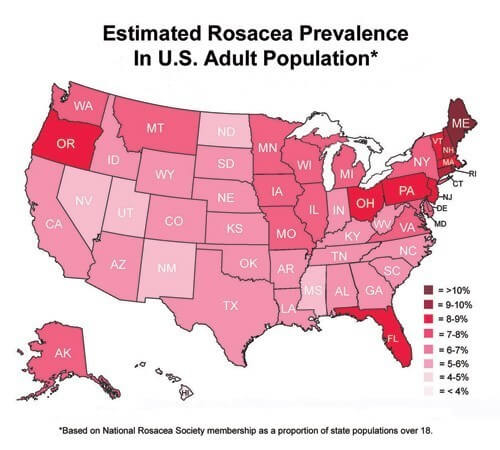 In an NRS survey of 600 rosacea patients, nearly 52 percent reported that a family member had also suffered from rosacea, and 42 percent said they were of Irish, German or English ancestry.

In order to map the estimated prevalence of rosacea in the United States, the NRS analyzed the zip codes of its 82,720 members to determine their states of residence.  Then, by using the number of NRS members, the 2010 U.S. Census data and the estimated total number of Americans with rosacea, the NRS was able to project an estimated percentage of individuals with rosacea over the age of 18 in each state.