Your Skin May Influence Rosacea's Appearance

Your skin is your bodyguard. Tough but pliable, it is a barrier to harmful substances, protects against excess ultraviolet radiation and helps regulate body temperature.

But in rosacea sufferers, the facial portion of this largest and most visible organ may erupt on its own or respond to a variety of environmental and lifestyle factors with redness, a pimple-strewn appearance and even an irritated feeling. Just what is your skin made of, and how does rosacea affect it? 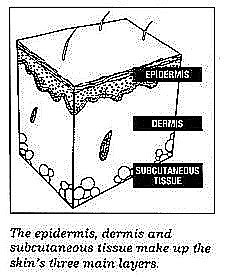 Though it is only 1.5 to 4 mm thick, the skin has three main layers. The top layer, the epidermis, acts as the skin's main barrier, with cells interlocking like bricks in a wall to keep essential liquids in and harmful substances out. The bottom layer, called the subcutaneous tissue, is a thickness of fat that acts as an insulator and shock absorber.

But it is the layer in between -- the dermis -- that contains the blood vessels and support structure that may play a role in the development of rosacea.

Rosacea appears to be a vascular disorder that begins gradually, with a flushing or redness that later becomes increasingly more severe and persistent.

Why is flushing so prominent in rosacea victims? One theory is that there may be some change in the skin of rosacea patients that makes flushing and redness more visible, according to Dr. Mark V. Dahl, professor and chairman of dermatology at the University of Minnesota. For example, there seems to be some deterioration in the top portion of the dermis of rosacea sufferers that may cause the bed of tiny veins (capillaries) that lies underneath to be more easily seen.

Another theory is that a lack of normal supporting tissue in the dermis, composed mainly of collagen and elastin fibers that allow the skin to be both strong and flexible, may permit the persistent flushing that may later result in the visible spidery blood vessels, Dr. Dahl said.

Dr. Dahl speculated that the edema often present in rosacea -- extra fluid in the tissues that may lead to a swollen, "baggy cheeks" appearance -- may lead to excess tissue (fibroplasia).

One way this may happen is that, during the recurrent facial swelling that may accompany flushing, the blood vessels may leak fluid containing a substance known as blood coagulation factor XIII that can produce excess tissue directly, Dr. Dahl said. Or chronic swelling from the papules and pustules may produce fibroplasia indirectly.

Fibroplasia marks the severe end of the rosacea continuum, often resulting in enlargement of the nose.

Compliance with ongoing medical therapy, as well as lifestyle modifications to eliminate factors that trigger flare-ups in individual cases, are considered essential to its effective control. In addition, laser surgery may be effectively used to remove visible blood vessels and excess tissue.