Rosacea (pronounced "roh-ZAY-sha") is a common but poorly understood disorder of the facial skin that is estimated to affect more than 16 million Americans.

It is a chronic but treatable condition that primarily affects the central face, and is often characterized by flare-ups and remissions. Although rosacea may develop in many ways and at any age, patient surveys indicate that it typically begins any time after age 30 as flushing or redness on the cheeks, nose, chin or forehead that may come and go.

Studies have shown that over time the redness tends to become ruddier and more persistent, and visible blood vessels may appear. Left untreated, inflammatory bumps and pimples often develop, and in severe cases -- particularly in men -- the nose may grow swollen and bumpy from excess tissue. In as many as 50 percent of patients the eyes are also affected, feeling irritated and appearing watery or bloodshot.

While the cause of rosacea is unknown and there is no cure, knowledge of its signs and symptoms has advanced to where they can be effectively controlled with medical therapy and lifestyle changes. Individuals who suspect they may have rosacea are urged to see a dermatologist or other qualified physician for diagnosis and appropriate treatment -- before the disorder becomes increasingly severe and intrusive on daily life. 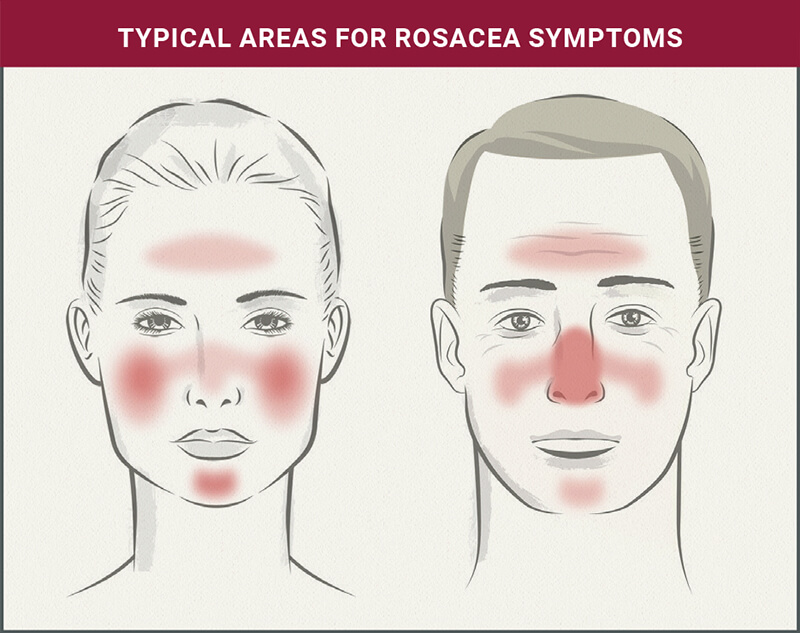