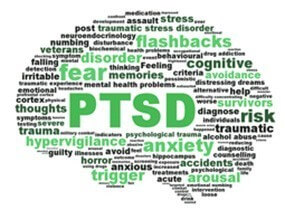 Post-traumatic stress disorder (PTSD) may be associated with physical symptoms as well as mental ones -- including increased risk of a condition known as neurogenic rosacea, according to a study reported at the recent annual meeting of the American Academy of Dermatology (AAD) in Washington, DC.

PTSD is a mental disorder in which symptoms often evolve after a person experiences a shocking, frightening or dangerous event. In addition to psychological symptoms stuch as flashbacks, hallucinations and anxiety, PTSD may be associated with physical disorders, including cardiovascular disease, respiratory problems, gastrointestinal disorders, chronic pain and sleep disorders. Neuroimaging studies of PTSD have found a reduced capacity of the brain to inhibit fear responses, which can result in heightened reactions in the autonomic nervous system, stress-mediated neuroendocrine response and other neural changes.

A growing number of researchers have identified neurogenic rosacea as a subset of rosacea that is associated with neurologic or neuropsychiatric conditions such as headache, depression, essential tremor and obsessive-compulsive disorder. Symptoms are typically similar to suptype 1 (erythematotelangiectatic) rosacea, with facial burning or stinging, redness and flushing being the most common. Scientists theorize that improper functioning in the nervous system may be the cause, though more research is still needed to determine the true nature of this potential form of the disease.

The new study, conducted by Dr. Madhulika Gupta, professor of psychiatry at the University of Western Ontario, and Dr. Aditya Gupta, professor of dermatology at the University of Toronto, examined whether neurogenic rosacea might be associated PTSD. Twenty women with chronic PTSD and a control group of 20 women diagnosed with mood disorders such as depression and bipolar disorder were examined for signs of neurogenic rosacea.

The scientific investigators found that seven of the PTSD patients had neurogenic rosacea, while only two of the control group did. The patients said psychological stress often preceded flare-ups of their rosacea symptoms, and the researchers reported that treatment with mood stabilizers improved patients' rosacea.

The researchers noted that while PTSD may be associated with a higher prevalence of neurogenic rosacea, further study is required to confirm the connection.