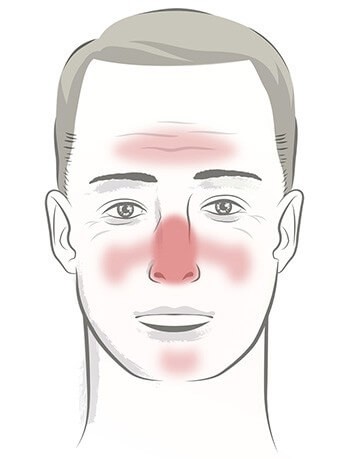 While clinical studies have suggested that rosacea may occur up to three times more frequently in women than in men, its effect on men shouldn’t be overlooked, especially in matters of the nose.

In an NRS survey of more than 2,000 patients, both men and women experienced rosacea symptoms on their chin, cheeks and forehead. However, men were more than twice as likely to experience an enlarged nose in a condition known as rhinophyma, also classified as subtype 3 (phymatous) rosacea. Symptoms of this subtype include excess tissue, thickening of the skin and irregular surface nodules. In contrast, women were more likely than men to experience symptoms on their chin and cheeks.

A red, inflamed nose can be unsightly, and men who suffer from this condition may also have another issue to face: the assumption that they are heavy drinkers. This common yet misguided myth was exemplified by comedian and actor W.C. Fields, whose rhinophyma was erroneously attributed to a fondness for drinking. Although drinking may aggravate rosacea symptoms in some, even those who abstain from drinking may develop the disorder. Fortunately today, rhinophyma can be corrected with laser surgery.

Unlike women, who can cover up their signs and symptoms with makeup, many men do not consider cosmetics to be an option and have to face the world with their rosacea symptoms on display. In addition, men face a unique skincare challenge that women don’t have to consider: shaving. Dulled razor blades can aggravate sensitive skin, so it is recommended that men with rosacea switch to an electric razor. Men should also test a new shaving cream or aftershave on a small patch of skin to avoid any that cause irritation, and use moisturizer to help prevent dryness.

In an NRS survey of over 1,000 patients found that 60 percent of all respondents and 88 percent of those reporting severe symptoms said the disorder had negatively affected their interactions with others in the workplace. Male and female patients alike have reported feeling embarrassment, depression, anxiety and isolation as a result of their condition. Fortunately, more than 64 percent of all respondents reported that effective treatment of their rosacea had improved their interactions with others in the workplace.

While men and women may differ in their signs and occurrence of rosacea, and more research is needed to further understand the differences between the sexes, they do have one thing in common: a proper skin-care regimen, avoidance of personal triggers and early medical diagnosis and treatment have helped many patients successfully manage their condition.