Knowledge of Demodex & Rosacea 'Tip of the Iceberg'? 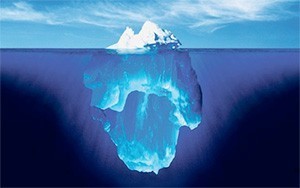 What is now known about Demodex and rosacea may only be the tip of the iceberg. A new study has found unexpected diversity in the bacteria living in and on the mites, as well as differences in which species are more associated with different subtypes of rosacea.

Demodex, a microscopic mite that is a normal inhabitant of healthy skin, has often been found in 15 to 18 times greater numbers in rosacea patients than in healthy subjects.

In a first-of-its-kind study1 of the microbiome of Demodex folliculorum and Demodex brevis, researchers at Aix Marseille Université in France collected Demodex from patients with subtype 1 (erythematotelangiectatic) rosacea and subtype 2 (papulopustular) rosacea, respectively, as well as control subjects with healthy skin. Through DNA analysis, the researchers identified a total of 92 species of microorganisms, including 36 never before recorded on humans.

When researchers compared the bacteria in mites from the two rosacea subtypes, they found significant differences in the microbiota of Demodex from subtype 2 patients versus those from subtype 1 and healthy skin. In mites living on papulopustular rosacea skin, the proportions of bacteria from the Proteobacteria and Firmicutes phyla increased, while members of the Actinobacteria phylum decreased. The researchers observed that the sebum in subtype 2 patients was composed of less saturated fatty acids, suggesting that differences in available nutrients might influence the nature of the mites' microbiome.

The study yielded many surprises, including the previously mentioned Snodgrassella alvi, a species of bacteria previously identified in the guts of bees. The researchers even identified Bartonella quintana, a bacterium associated with trench fever in World War I soldiers, in one subtype 1 patient. Conspicuously missing, however, was evidence of Bacillus oleronius, one of the only species previously associated with Demodex and rosacea, although the researchers noted that this may have been due to limitations of their method of DNA analysis.

The results of this small study show how unexpectedly diverse the human microbiome can be, and illustrate how much may still be learned from further investigation of Demodex and its potential role in the development of rosacea.