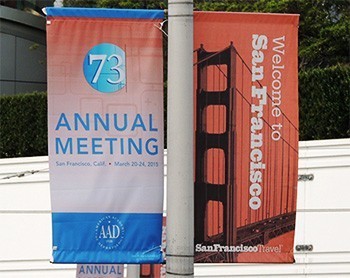 Rosacea was the subject of numerous scientific sessions at the recent American Academy of Dermatology annual meeting in San Francisco. Among the topics of discussion were concerns about antibiotic resistance, the role of Demodex mites in the disorder and a potential new treatment modality for redness.

Dr. James Del Rosso, adjunct clinical professor of dermatology, Touro University College of Osteopathic Medicine, spoke on "real world" concerns related to antibiotic resistance. Dr. Del Rosso said that while antibiotic-resistant strains of Propionibacterium acnes (associated with acne) are relevant clinically, for example, other bacteria present in or on the body are also exposed to antibiotics and more resistant bacterial strains emerge. If a patient taking antibiotics for rosacea develops an antibiotic-resistant strain of a potentially pathogenic bacteria that colonizes another part of the body, such as the throat, they could pass the organism to others through coughing or other direct contact.

"'I don't see resistance in my practice,' say a lot of doctors. But how would you really know?" Dr. Del Rosso said. He pointed out that although dermatologists’ patients may consult different specialists when they face an antibiotic-resistant bacterium that is causing a non-dermatologic infection, the prescribed antibiotics are known to cause selection pressure and antibiotic resistance. He cautioned physicians to be more aware of this when they prescribe antibiotics for their patients and to avoid overuse. He noted that a sub-antimicrobial formulation of doxycycline, which has anti-inflammatory properties without the same potential for causing bacterial resistance, is available in oral form specifically for rosacea, and also suggested visiting SaveAntibiotics.org for more information about the issue.

Dr. Julie Harper, clinical associate professor of dermatology at the University of Alabama - Birmingham, was one of several physicians who discussed the role of Demodex mites in rosacea during the conference. Dr. Harper cautioned colleagues to remember that the mites are unlikely to be the sole cause of the disorder, but rather just one of many potential factors for rosacea flare-ups that may affect some patients more than others. She noted that medical therapies now exist to treat Demodex infestation.

Dr. Joel Schlessinger of the Advanced Skin Research Center in Omaha, Nebraska, presented an ongoing study evaluating the use of microfocused ultrasound with visualization to treat subtype 1 (erythematotelangiectatic) rosacea. He said early results suggest that the new technology, currently used to lift and tighten skin, may be effective in helping to reduce redness in patients with moderate to severe rosacea.