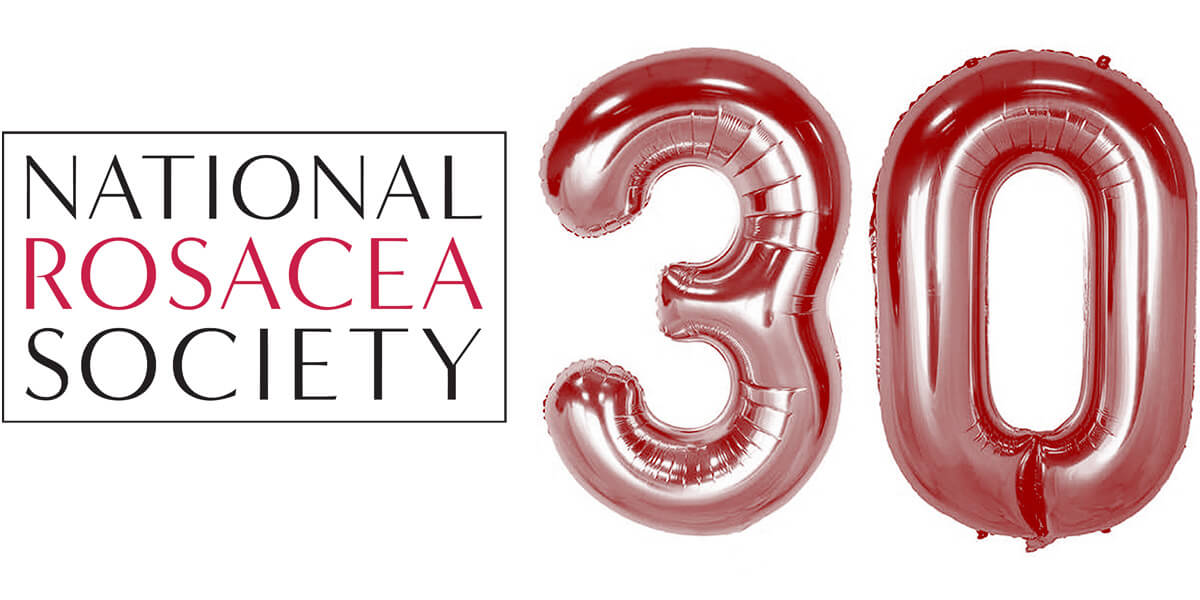 The National Rosacea Society (NRS) celebrates its 30th anniversary in 2022. The past three decades have seen tremendous progress toward fulfilling our mission of improving the lives of people with rosacea through awareness, education and support of medical research.

“Thanks to the efforts of the NRS, its members and researchers studying on the disease, rosacea is both more recognized and better understood than ever before,” said Andrew Huff, executive director of the NRS.

When the NRS was formed in 1992, rosacea was considered a rare disease, and the first treatment, topical metronidazole, had been approved as an orphan drug by the U.S. Food and Drug Administration because it was believed the disorder affected fewer than 200,000 Americans. It soon became apparent that millions of people suffered from rosacea but didn’t know they had a medical condition and that it could be treated.

Based on subsequent research, the NRS now estimates that more than 16 million Americans, or about one in 20, suffer from this often life-disruptive condition.

As it became evident that rosacea was both highly prevalent and widely misunderstood, the NRS embarked on a public awareness program that has resulted in coverage in countless newspapers and magazines nationwide, as well as on TV, radio and now the web and social media. As a result of our ongoing awareness efforts, today rosacea is routinely covered not just during Rosacea Awareness Month in April but year round. Thanks to this coverage, rosacea is more commonly known by the public, and millions of sufferers have sought medical help from dermatologists.

Since the cause of rosacea is unknown and there is no cure, in 2000 the NRS established a grants program dedicated to encouraging and supporting medical research into the potential causes and other key aspects of the disorder. Funded entirely by individual donations, the research grants program has awarded over $1.6 million to fund more than 75 studies to date, resulting in substantial improvements in the understanding and potentially more effective treatment of the disorder.

To provide a foundation for meaningful scientific investigation, in 2002 the NRS organized a consensus committee and review panels of 21 medical experts to establish a standard definition and classification system for rosacea, followed by a standard grading system in 2004 and standard management options in 2009. Thanks to the substantial advances in the understanding of rosacea gained through scientific investigations in the past 20 years, the NRS convened medical experts to publish an updated classification system and pathophysiology in 2017.1 While the original classification system designated the most common groupings of primary and secondary features as subtypes, rosacea is now understood as a single disease with a wide variety of potential presentations. Although its clinical features, or phenotypes, may appear at different times and in varying combinations, scientific research indicates they may all be manifestations of the same underlying inflammatory continuum.

Medical understanding of rosacea’s signs and symptoms isn’t the only thing that has changed. There is now a broad range of therapies now available to address each phenotype. The NRS Expert Committee published updated standard management options in 2020 to help physicians tailor treatment to each patient’s individual case.2

Today the NRS provides education about rosacea to more than 1 million patients each year through informational pamphlets, Rosacea Review and social media, while the NRS website, rosacea.org, serves as the leading online resource for in-depth information about the disorder. Meanwhile, the NRS has continued its extensive public awareness program at no cost to the public, thanks to the generous support of an increasing number of companies committed to rosacea, reaching a total audience of more than 400 million people annually.

“We are gratified by the advances made in the understanding and treatment of this often life-disruptive disease over the past 30 years, and proud of the NRS’s role in that progress,” Huff said. “And importantly, we are grateful to our members for their continued and vitally needed support.”

Please join or renew your membership to support research and help us continue this important work.