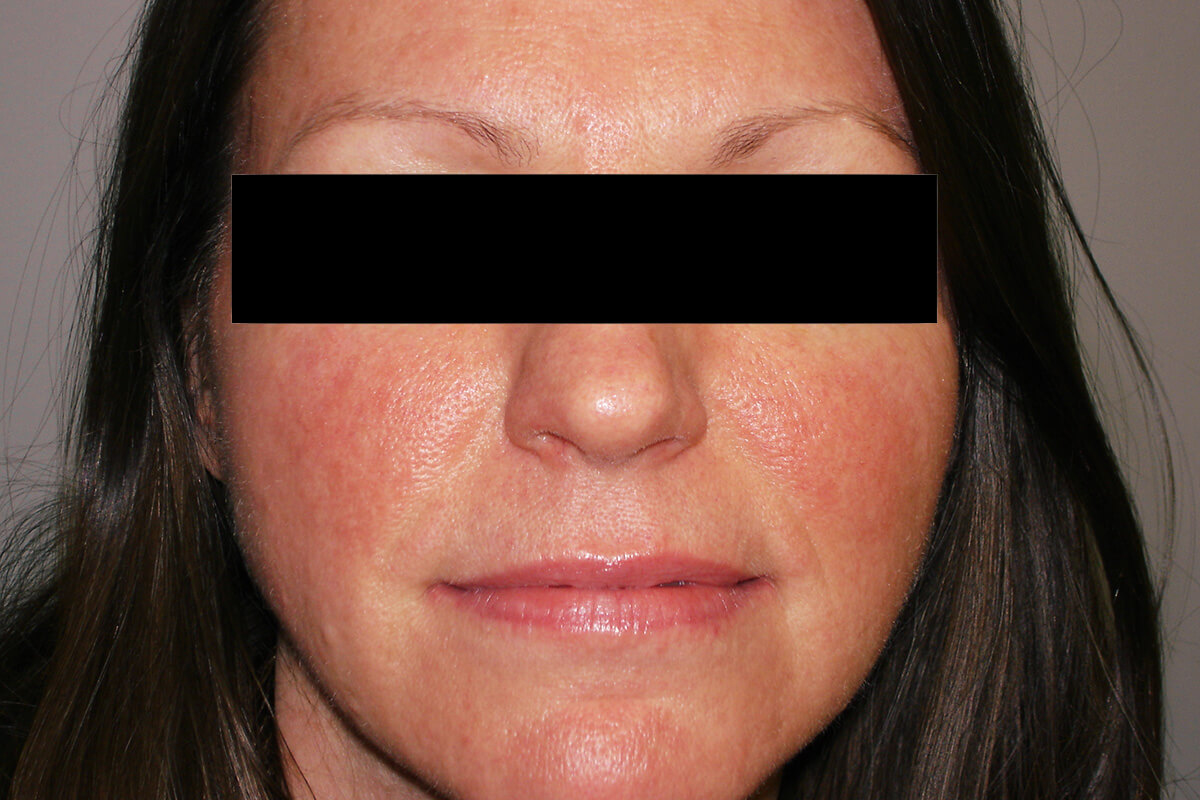 New developments in rosacea call for dermatologists to place greater emphasis on addressing persistent facial redness (erythema), according to experts at a recent National Rosacea Society (NRS) roundtable to provide an update on this key aspect of the disorder, based on the new standard classification system, recent burden-of-illness study results, new standard management options and significant advances in medical therapy and patient care.

Drawing from current scientific knowledge as well as clinical experience, the new standard classification of rosacea shifted away from subtypes and identifies the various signs and symptoms that may occur in many possible combinations in individual patients, noted Dr. Richard Gallo, chairman of dermatology at the University of California – San Diego.1 It was agreed that dermatologists should now consider rosacea as a single disease with multiple potential features, known phenotypes, recognizing persistent facial erythema as the primary diagnostic feature. Skin thickening (phymatous changes), although less common, are also diagnostic, and additional major signs include bumps and pimples (papules and pustules), flushing, small visible blood vessels (telangiectasia) and certain ocular manifestations. The presence of any two of the major phenotypes may be considered diagnostic, and secondary phenotypes include burning, stinging, swelling (edema) and dryness.

“Rosacea encompasses a multitude of possible combinations of signs and symptoms, and we now have an arsenal of medical therapies to address each of them directly,” Dr. Gallo said. “It is more important than ever that patients are made to understand that effective treatment is more than simply ‘Take your medicine.’ The good news is that a combination of rosacea therapies may often offer a synergistic effect, and a clear and detailed explanation of how exactly to use the various oral and topical therapies can help provide results that will improve quality of life.”

He noted that recent studies have shown that rosacea’s diverse features, from erythema to papules and pustules to phymatous changes, appear to be part of a consistent continuum of inflammation. As a result, medical therapies that work by reducing inflammation may be useful in treating not only papules and pustules, for instance, but also erythema.

The roundtable participants also discussed the potential need for a way for clinicians and researchers to quantify the severity of each phenotype in a patient, perhaps with a scoring system. A tool that evaluates quality of life may also aid in gauging the efficacy of treatment.

Patients: Persistent Redness is Most Damaging to Quality of Life
The NRS has collected data on the social and emotional effects of rosacea and erythema from patient surveys in its newsletter, Rosacea Review.2 In a survey of 1,675 patients, 82 percent of those who suffered from erythema reported the condition had a negative impact on their general outlook on life, with the figure rising to 90 percent for those with moderate to severe redness.

The greater quality of life impact on those with more severe redness was echoed in a recent burden of illness study on facial erythema in rosacea.3 In the comprehensive survey of 708 respondents, the most common symptoms were flushing lasting longer than 10 minutes (84%) and persistent centrofacial erythema (69.1%).

“While the patients reported flushing as the most common sign, they named redness as the most bothersome,” said Dr. Hilary Baldwin, associate professor of dermatology at Rutgers Robert Wood Johnson Medical School and one of the authors of the study. “And the more severe their facial erythema, the more bothersome it was, even more so than bumps and pimples.”

The mean scores on a validated Dermatology Life Quality Index (DLQI) were 5.2 overall, which is comparable to scores for acne patients, Dr. Baldwin said. However, while individuals with mild rosacea scored a 3.8 and those with moderate rosacea scored a 5.7, respondents with severe erythema scored a 13.4 — comparable to scores given by individuals with eczema, atopic dermatitis and psoriasis.

“Across all questions related to their condition’s impact on emotional well-being, social life and grooming habits, those with severe erythema were suffering significantly more than those with mild or moderate redness,” Dr. Baldwin said.

Dr. Julie Harper, president and owner of the Dermatology and Skin Care Center of Birmingham and another author of the study, observed that in spite of its considerable impact on sufferers, facial erythema is often dismissed by physicians as less serious.

Therapeutic Options are Few but Effective
The doctors noted there are few FDA-approved therapies specifically for the erythema of rosacea. Though both are alpha agonists, they act on different receptors and have different actions, said Dr. Linda Stein Gold, director of dermatology clinical research at the Henry Ford Health System.

“Brimonidine kicks in within 30 minutes and many patients see a dramatic reduction of their erythema,” Dr. Stein Gold said. Exacerbations of redness have also been reported, she noted, with peaks coming at approximately 3-6 hours and again as the medication began wearing off at 10-12 hours. A possible remedy may be to apply one rather than five pea-sized amounts, which is instructed in the package insert, to various areas of the face. It is notable that women who are flushers and blushers may be more likely to experience a rebound, she said.

Oxymetazoline, the other FDA-approved alpha agonist, has a more gentle onset, she noted, with some improvement evident in 1-3 hours and continued impact seen over the course of the day, while the return of erythema can occur in a more subtle way. The exacerbation of erythema seen with brimonidine was not seen in the oxymetazoline clinical trials, Dr. Stein Gold said. Overall, for many patients, oxymetazoline results in normal-appearing skin tones and may be easier for patients to use, leading to better compliance with therapy.

“One question we need to consider is whether we are modifying the disease in the long term,” she said, noting that in long-term studies of alpha agonists, patients appeared to have improved baseline redness over time. Although studies have not been conducted, the participants agreed the medications might also potentially inhibit progression as well as help maintain remission.

Though the quality of evidence is limited, light devices including intense pulsed light (IPL) and pulsed dye and potassium titanyl phosphate (KTP) lasers are well established in practice and have been shown to be highly effective in removing telangiectasia and diminishing erythema. A small study comparing IPL and pulsed dye laser found a 60% reduction in erythema, versus a 45% reduction with pulsed dye.4

Dr. Stein Gold added that she was aware anecdotally of physicians who used alpha agonists to clear redness in order to better identify telangiectasia for laser treatment.

When More is More: a Partnership to Achieve the Clearest Skin
While rosacea is still treated by many with a monotherapy approach, the roundtable participants agreed that treating every present phenotype with targeted therapies in cooperation with the patients will achieve the best overall outcome, both objectively in terms of clear skin and subjectively in terms of quality of life.

Dr. Harper noted that it is important to manage the patient’s expectations. “State that clear skin is the goal – if we don’t shoot for it, nobody’s going to make it,” she said. “It’s going to take more than one visit and you’ll probably have to use more than one tool.”

The initial visit may be lengthy and should include five elements, she said: identifying the visible signs of rosacea (including erythema, telangiectasia, papules and pustules, and phymas); ascertaining what bothers the patient (including invisible symptoms such as burning and stinging); discussing trigger factors and how to avoid them; educating about skin care and sun protection; and devising a treatment plan.

“You have this full menu of rosacea — redness, bumps and pimples, ocular symptoms, et cetera,” Dr. Harper said. “It’s like a meal, but just as you can’t eat everything with one utensil, you can’t use just one drug to treat every sign and symptom.”

Just as a fork won’t be very effective if you’re trying to eat soup, some therapies will be more appropriate than others to address certain signs or symptoms, she explained.

Dr. Harper added that a combination of medicines aimed at specific phenotypes may work more synergistically overall when taken together than when staggered. She cited a study by Dr. Stein Gold that found using brimonidine for erythema together with ivermectin for papules and pustules from the start resulted in clearer skin than using brimonidine only after several weeks had passed.5

“If you use just one, you could miss some benefit,” agreed Dr. Stein Gold.

In addition to designing a comprehensive treatment plan, educating the patient on compliance — explaining why more than one medication is necessary and exactly how the therapies should be used — is challenging but necessary, Dr. Harper stressed. The time of day and frequency and areas of application should be clearly explained. A patient who applies oxymetazoline before going to bed won’t see the full benefit of treatment, for example.

Ensuring that patients understand the reason for and value of their therapies as well as how properly to use them is part of the physician’s challenge, the doctors noted. “Patients should also be reminded that therapy is intended not just to eliminate existing features, but to maintain remission,” Dr. Gallo added. “With patients I liken it to brushing your teeth — you’re not treating a cavity with toothpaste, you’re preventing future cavities.”