BARRINGTON, Illinois (April 1, 2016) -- Could a widespread facial skin disorder be a signal for other possible health problems? New studies are now revealing potential associations between rosacea and increased risks of cardiovascular disease, gastrointestinal disease, certain types of cancer and many other systemic illnesses. The National Rosacea Society (NRS) has designated April as Rosacea Awareness Month to alert the public to the early warning signs of this chronic and conspicuous facial disorder now estimated to affect more than 16 million Americans.

“Recently there have been a growing number of reports associating rosacea with a variety of potentially serious diseases,” said Dr. Richard Odom, professor of dermatology at the University of California-San Francisco. “Although it’s important to note that causal relationships between rosacea and these other diseases have not been demonstrated, this provides further reason for people who suspect they may have rosacea to seek diagnosis and appropriate treatment.” 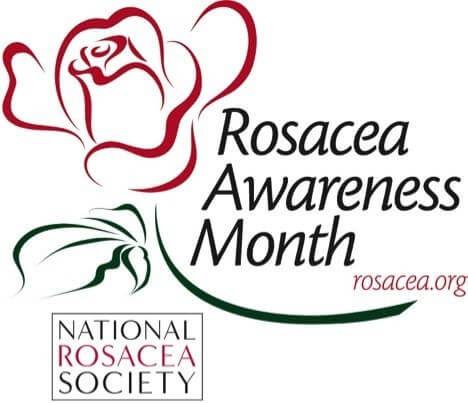 In the well-known “Nurses Health Study II” – an ongoing biennial questionnaire on the medical history of 116,000 nurses since 1989 – the more than 6,000 women diagnosed with rosacea were 1.59 times more likely to have thyroid cancer and 1.5 times more likely to have basal cell carcinoma, a form of skin cancer, than those without rosacea.2 A recent clinical study of 130 individuals with rosacea at Johns Hopkins University also found a significant association between rosacea and allergies, respiratory diseases, gastroesophageal reflux disease (GERD), diabetes, urogenital diseases and female hormone imbalance.3 Other recent studies have found increased risks of inflammatory bowel disease and glioma, a form of brain cancer, in people with rosacea.4,5

“As with any research, the associations found in these early studies may possibly be influenced by various confounding factors that will be clarified over time as scientific investigation continues,” Dr. Odom said. “Nonetheless, until the significance of these relationships is definitively determined and understood, it is reasonable for people who suspect they may have rosacea to seek appropriate medical evaluation of their skin and, if appropriate, their general health as well.”

Rosacea is a common but poorly understood disorder of the facial skin that typically first strikes anytime after age 30, and may initially resemble a simple sunburn or an inexplicable blush. Suddenly, without warning, a flush comes to their cheeks, nose, chin or forehead. Then just when they start to feel concerned, the redness disappears.

Among the most famous rosacea sufferers is former President Bill Clinton, whose doctors disclosed that he had this condition in The New York Times. Others reported to have suffered from the disorder include Princess Diana, singer Sam Smith, model Dita Von Teese and comedian Amy Schumer.

Adding insult to injury is the common myth that rosacea sufferers who have an enlarged nose or ruddy complexion may be heavy drinkers. In fact, while alcohol may aggravate rosacea, these symptoms can be just as severe in a teetotaler. Another common misconception is that rosacea is caused by poor hygiene, when in reality it is unrelated to personal cleanliness.

According to NRS surveys, most rosacea patients have felt the negative emotional and social effects of their condition regardless of severity. In a survey of 1,675 rosacea patients, 90 percent said the disorder's effect on their personal appearance had lowered their self-esteem and self-confidence, and 88 percent said they had suffered embarrassment. They also reported a wide range of negative feelings, including frustration, cited by 76 percent; anxiety and hopelessness, each noted by 54 percent; depression, 43 percent; anger, 34 percent; and isolation, 32 percent. Fifty-two percent of the respondents said they had avoided face-to-face contact because of the disorder. Among those with severe symptoms, 51 percent said they had even missed work because of their condition.

Research is now helping to dispel common misconceptions about the disorder by illuminating rosacea’s relationship to various internal and external factors that may be involved in its development. Through its patient-funded research grants program, the NRS has awarded over $1.4 million to support 61 studies that may lead to advances in its treatment and potential prevention or cure.

Ongoing research has suggested that rosacea may be caused by various possible factors, including irregularities of the immune system, nervous system, facial blood vessels and genetics, as well as the presence of microbes and Demodex mites on the skin. Meanwhile, there is now an expanding range of treatment options for its many potential signs and symptoms.

Although the definitive cause of rosacea remains unknown, a vast array of lifestyle and environmental factors has been found to trigger flare-ups of signs and symptoms in various individuals. Common rosacea triggers include sun exposure, emotional stress, hot or cold weather, wind, heavy exercise, alcohol, spicy foods, heated beverages, humidity, certain skin-care products and potentially an overabundance of Demodex mites.

“The good news is that rosacea can now be effectively controlled with medical therapy and lifestyle changes,” Dr. Odom said. “As medical research continues to reveal connections between the health of the skin and other parts of the body, further insights may also emerge into how to treat rosacea as well as improve overall health.”

Comprehensive information and materials on rosacea are available on the NRS website at rosacea.org. The NRS encourages those interested in spreading awareness during the month of April to visit the official Rosacea Awareness Month landing page at rosacea.org/ram and follow the online conversation using the hashtag #RosaceaAwareness. The NRS may also be followed on Facebook, Twitter or Pinterest for up-to-date information and tips on rosacea. Further information may be obtained by writing the National Rosacea Society, 111 Lions Dr., Ste. 216, Barrington, Illinois 60010; via email at info@rosacea.org; or by calling its toll-free number at 1-888-NO-BLUSH. Rosacea Awareness Month activities in 2016 are made possible by funding from Galderma Laboratories, L.P.

Images
The NRS has many images relating to rosacea for use with your story. Please contact us by telephone or e-mail to request an image. Click here for a gallery of patient photos.