NORTH POLE (December 5, 2012) – Allegations that Santa Claus’ red nose and cheeks were due to drinking too much spiked eggnog were laid to rest today when the negative results of a blood alcohol test were released. “There was no alcohol in his blood,” stated the medical examiner. His test did, however, register unusually high levels of gingerbread and hot chocolate, officials reported.

Rumors had surfaced when several members of a literary society had noticed his “cheeks were like roses, his nose like a cherry.” Ironically, a physician associated with the National Rosacea Society may have the answer to Santa’s puzzling appearance.

“It looks like a clear-cut case of rosacea to me,” commented Dr. Jerome Litt, assistant clinical professor of dermatology at Case Western Reserve University.

Rosacea, a common skin condition of middle-aged men and women, is characterized by facial redness in the area across the nose and cheeks, and sometimes the chin. As the disease worsens, particularly in men, the nose may become red and bulbous from excess tissue.

According to the National Rosacea Society, a Gallup survey showed that 67 percent of Americans may associate the symptoms of rosacea with heavy consumption of alcohol. In actuality, while alcohol may aggravate the condition, rosacea symptoms may be just as severe in a teetotaler.

Dr. Litt recommended that Santa and others with similar symptoms see a dermatologist for a definitive diagnosis and appropriate medical treatment. “The prognosis is bright for rosacea because effective medical treatment is available,” stated Dr. Litt. While the exact cause is uncertain, this conspicuous condition can usually be brought under control by prescribing oral and topical therapy.

When asked to comment on Dr. Litt’s recommendations, Claus said, “Ho, ho, ho, Christmas without hot chocolate? And I go from a cold sleigh to a hot fireplace. I can’t prevent these sudden changes in temperature without disappointing the children, but I promise to see my dermatologist.” Dr. Litt had no comment when asked if he thought a veterinarian could be of any help to Rudolph, who seems to have a similar problem.

People who suspect they may have rosacea can visit the NRS website at www.rosacea.org, or call its toll-free number at 1-888-NO-BLUSH to obtain comprehensive information on the disorder. Information and educational materials are also available by writing the National Rosacea Society, 196 James Street, Barrington, Illinois 60010; or via e-mail at rosaceas@aol.com. 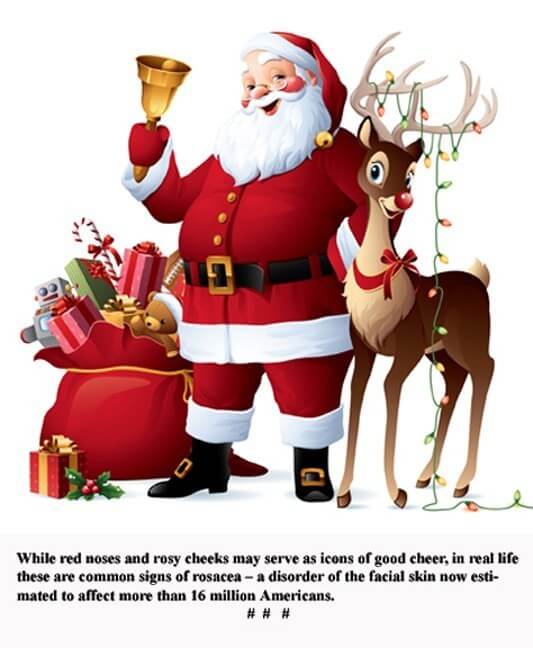