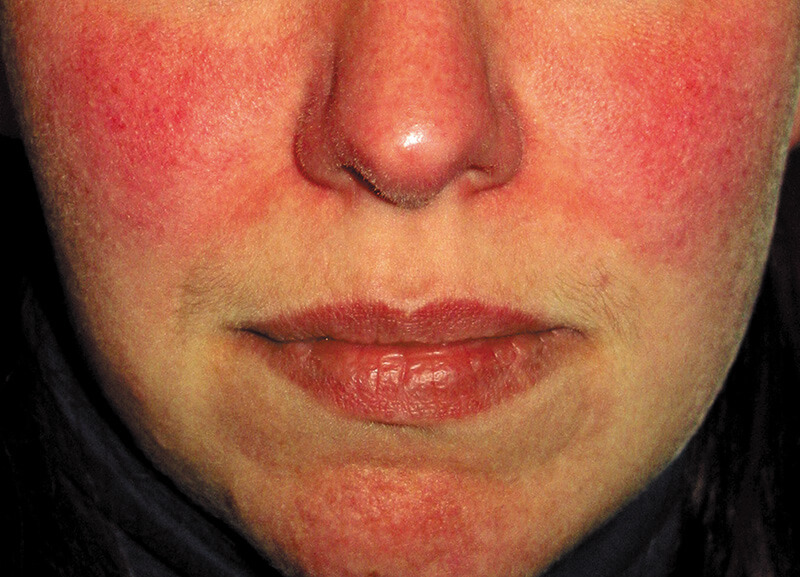 New recommendations urging dermatologists and other health professionals to place greater emphasis on persistent facial redness (erythema) in rosacea were recently published in the Journal of Drugs in Dermatology.1 Titled “Update on Facial Erythema in Rosacea,” the new publication is based on a recent National Rosacea Society (NRS) roundtable to discuss this key aspect of the disorder in light of its recently updated standard classification system and standard management options, new burden-of-illness study results, and significant advances in medical therapy and patient care.

“Based on current scientific knowledge and clinical experience, rosacea is now classified as a single disorder with many potential phenotypes (signs and symptoms) that may occur in various combinations, with persistent facial erythema as the primary diagnostic sign,” said Dr. Richard Gallo, chair of dermatology at the University of California-San Diego, who led the roundtable. “Combined with study results showing the substantial psychological and social impact of facial erythema alone, these important findings have clarified our understanding of how and why all signs and symptoms of rosacea should be effectively managed for optimal patient outcomes.”

In addition to erythema, phymatous changes (skin thickening), though less common, are also designated as diagnostic, and major signs of rosacea include papules and pustules (bumps and pimples), flushing, telangiectasia (tiny visible blood vessels) and certain ocular manifestations. The presence of any two of the major phenotypes may be considered diagnostic, and secondary phenotypes include burning, stinging, edema (swelling) and dryness.

Recent research has demonstrated that rosacea’s initial redness as well as its other diverse features are likely to be part of a consistent continuum of inflammation, and medical therapies that work to reduce inflammation may be useful in treating this wide range of signs and symptoms. In addition, data collected in NRS surveys as well as in burden-of-illness studies showed that persistent facial redness, though often dismissed by physicians as a less serious phenotype, has a significant impact on sufferers’ quality of life, often comparable to the impact of eczema, atopic dermatitis and psoriasis. In an NRS survey of 1,675 rosacea patients, 82 percent of those who suffered from erythema reported the condition had a negative impact on their general outlook on life, with the figure rising to 90 percent for those with moderate to severe redness.

There are currently two FDA-approved prescription therapies specifically for the erythema from neurovascular dysregulation in rosacea, brimonidine and oxymetazoline, both alpha agonists but acting on different receptors. Brimonidine acts within 30 minutes, and many patients see a dramatic reduction of erythema. However, the authors noted that exacerbations of redness have been reported, while some patients also complain of over-whitening of the skin. Oxymetazoline has a gradual onset, with peak reduction of erythema at three hours, lasting throughout the day and returning to baseline slowly and more subtly. The exacerbation of erythema seen with brimonidine was not found in oxymetazoline clinical trials, and in many patients it results in natural appearing skin tones and may be easier to use.

Anti-inflammatory therapies may be used to reduce perilesional erythema (the redness around bumps and pimples), and light devices such as pulsed dye and potassium titanyl phosphate (KTP) lasers and intense pulsed light (IPL) are well established in clinical practice as effective in removing telangiectasia and reducing erythema. The authors noted that alpha agonists have also been used to clear background erythema in order to better assess telangiectasia for laser treatment.

While rosacea is still treated by some physicians with only a single medication, the roundtable participants agreed that treating every present phenotype with targeted therapies in cooperation with the patients will achieve the best overall outcome, both objectively in terms of clear skin and subjectively in terms of quality of life.

In addition to designing a comprehensive treatment plan, educating the patient on compliance — explaining why more than one medication may be required and exactly how the therapies should be used — is challenging but necessary, the authors stressed. They noted that medical therapies and lifestyle adjustments to avoid triggers may be essential not only in managing the signs and symptoms but in maintaining remission.