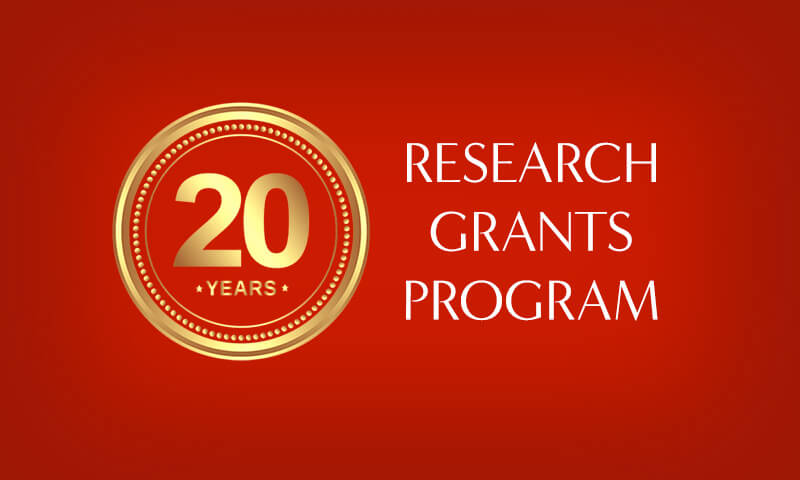 More than two decades ago, rosacea was a poorly understood condition that was often considered a rare disease. Today it is estimated that more than 16 million Americans suffer from its conspicuous and embarrassing signs and symptoms, and the good news is that the advancement of scientific knowledge and treatment of rosacea has kept pace with its far wider recognition. This fall marks the 20th anniversary of the National Rosacea Society Research Grants Program, which has awarded more than $1.6 million for 71 studies to date and has played a leading role in improving the lives of people with rosacea by funding important studies that have led directly toward advances in its treatment, management and potential prevention.

Because of the need for better medical care of rosacea patients, the Society’s Research Grants Program – funded exclusively by donations from individuals – has fostered dramatic strides in the understanding of the disease process to provide an essential foundation for developing improvements in treatment. Today a growing array of innovative therapies are available for rosacea, which in many patients are able to fully eliminate its signs and symptoms.

“We are grateful for the vital support of the many thousands of rosacea patients who have donated to this important program,” said Dr. Richard Gallo, chairman of dermatology at the University of California-San Diego and a member of the NRS medical advisory board, which selects studies for funding, “Dermatologists now have a much better understanding of the disorder, and further advances in therapy are on the way.”

Among the key scientific breakthroughs was the discovery of the role of specific molecules in the development of rosacea. In a landmark study funded by the NRS, it was found that abnormal production of cathelicidins, an antimicrobial molecule produced by the immune system to combat illness, led to inflammatory bumps and pimples in rosacea patients, as well as vascular effects such as flushing and visible blood vessels.

In studying the neurovascular system in rosacea, researchers have discovered that certain sensory nerves around blood vessels, which may be linked to stinging, increase during rosacea’s development. More recently, a neuropeptide was found to be involved in the communication between the nervous and vascular systems, potentially leading to flushing.

Supported by NRS grants, medical scientists are continuing to define the inflammatory process of rosacea through the ongoing study of molecules produced by mast cells, located at the interface between the nervous system and vascular system, possibly forming the link between rosacea triggers, flushing and inflammation. It now appears that a consistent disease process, involving multiple factors, underlies the various potential signs and symptoms of rosacea, and the role of each of these factors is increasingly understood.

Additional studies have investigated the role of genetics in rosacea. An NRS-funded study in twins found that a combination of genetics and environmental factors may contribute equally to the development of the disorder, and a separate investigation identified two genetic variants associated with rosacea in areas of the genome that are also associated with autoimmune disease. Now a recent study has pinpointed seven genomic regions potentially associated with rosacea symptom severity, and suggests that both skin type and inflammatory mechanisms are part of the disease process. In other research, microscopic Demodex mites – a natural part of the human microbiome – have frequently been observed in greater numbers in those with rosacea, and evidence appears to be mounting that an overabundance may possibly trigger an immune response in people with rosacea.

“Today there are multiple topical and oral prescription therapies that can be tailored to the needs of each individual rosacea patient,” Dr. Gallo said. “At the same time, new research is uncovering a host of potential biological targets to further address rosacea’s many and varying signs and symptoms.” Further information on NRS-funded studies can be found in the Research Grants section of the society’s website at rosacea.org. Please join or renew your membership today to help continue this important program.