Rosacea (pronounced “roh-ZAY-sha”) is a common but poorly understood disorder of the facial skin that is estimated to affect more than 415 million people worldwide. It is a chronic but treatable condition that primarily affects the central face – usually the cheeks, nose, chin or forehead – and is often characterized by flare-ups and remissions.

Patient surveys indicate rosacea often begins as a facial redness that may come and go, and might be mistaken for extended blushing or sunburn that doesn’t go away. Over time the redness becomes more persistent, and tiny visible blood vessels may appear. Without treatment, bumps and pimples are common and in advanced cases, the skin may thicken from excess tissue, especially around the nose. In about half of patients, the eyes may also become irritated and appear watery or bloodshot.

Although rosacea cannot be cured, its symptoms can be controlled and its progression arrested through long-term medical treatment and lifestyle modifications. This booklet from the National Rosacea Society (NRS) is designed to help you moderate or eliminate those lifestyle and environmental factors that may aggravate your individual condition.

How Is Rosacea Diagnosed and Treated?

Rosacea is typically diagnosed through the identification of individual signs and symptoms, called phenotypes, that may develop during the disease process.

A diagnosis of rosacea may be considered in the presence of at least one diagnostic sign – either persistent redness of the central facial skin or, less commonly, thickened skin in the central face (known as phymatous changes, often on the nose). Two or more major signs may also indicate rosacea, including bumps and pimples, flushing, visible blood vessels, and eye irritation. Secondary signs and symptoms, such as burning or stinging, swelling, and dry appearance, may also develop but are not diagnostic. Physicians must rule out other possible causes of rosacea-like symptoms – such as lupus, steroid-induced rosacea or seborrheic dermatitis – before confirming the diagnosis.

While rosacea cannot be cured, its symptoms can be controlled through medical treatment and lifestyle modifications. The first step is to visit a dermatologist who can provide a professional diagnosis and work with you to develop a treatment plan specific to your symptoms. Because the underlying disorder is chronic and cannot be cured, it’s important to consistently use medications as they are prescribed even after the reduction or remission of symptoms is achieved. 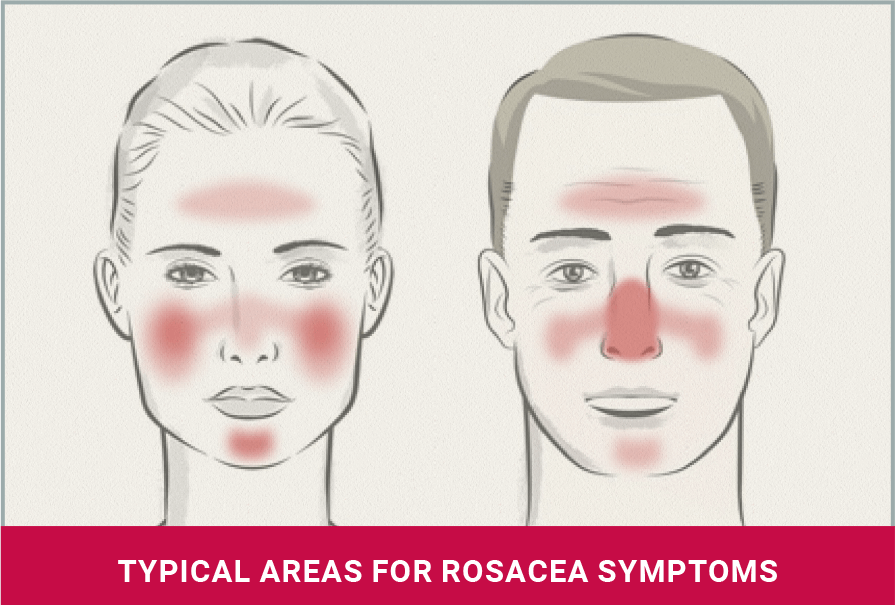