Lupus or Rosacea? Test May Mislead 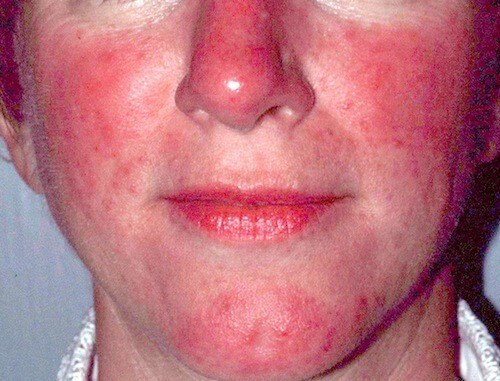 Diagnosis: Lupus. Or could it be rosacea?

Lupus erythematosus -- long known as an autoimmune disorder -- and rosacea share several signs and symptoms: facial redness, sensitivity to sunlight, and a tendency to affect women more than men. In fact, physicians have sometimes turned to blood tests to tell them apart. Now, researchers have discovered that those tests may not be as indicative as once thought.

The blood tests look for elevated levels of antinuclear antibodies (ANAs), proteins produced by the immune system that target the nuclei of normal cells. Patients with lupus usually have high concentrations of ANAs in their blood, and this was thought by some to differentiate the disease from rosacea.

However, a new study of 101 rosacea patients and 26 people with healthy skin, conducted by researchers in the Department of Dermatology at the Medical University of Lodz, Poland, found that 53.5 percent of the rosacea patients showed significantly increased levels of ANA in their blood, while only two of the control group with healthy skin had high levels of ANA. Patients with subtype 2 (papulopustular) rosacea were more likely to have significant ANA levels (32.7 percent of patients) than those with subtype 1 (erythematotalengiectatic) rosacea (16.8 percent of patients). After two years of follow-up, none of the patients with an elevated ANA developed an apparent autoimmune disorder.

The researchers concluded that ANA blood tests should not be relied upon alone for differential diagnosis of lupus versus rosacea. However, ANA-positive patients may need additional studies as indicated by other findings, and should be followed over time.