Exercise May Cause Flare-Ups but Can Be Controlled 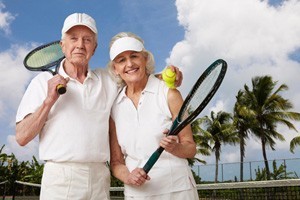 While physical exercise may be a common rosacea trigger, the right changes in routines can reduce the likelihood of a flare-up, according to results of a new patient survey by the National Rosacea Society.

More than 80 percent of the survey's 561 respondents said exercise aggravates their rosacea signs and symptoms. Aerobic exercise in general (also known as cardio) was cited as the most aggravating, mentioned by nearly 55 percent of the patients. This type of exercise, which increases the body's demand for oxygen and results in higher respiration and heart rates, encompasses a wide variety of low- to medium-intensity forms of activity, such as jogging, swimming and cycling.

"Increased heart rate and respiration are usually accompanied by an increase in blood flow and core body temperature, so it's not surprising that this type of exercise exacerbates rosacea," said Dr. Julie Harper, associate clinical professor of dermatology at the University of Alabama-Birmingham. "The key is to modify the workout to minimize the effects on rosacea while still maintaining the cardiovascular and respiratory benefits."

Nearly half of those answering the survey said they have modified their exercise routine as a result of their rosacea. Of those who made modifications, 62 percent said it has reduced the frequency or severity of their flare-ups.

Among the wide range of activities that survey respondents said were aggravating to their condition, jogging or running was the most frequently cited, named by 41 percent. Walking was not far behind, mentioned by 37 percent, followed by bicycling, noted by 28 percent.

Other activities reported as rosacea triggers included push-ups and sit-ups, named by 22 percent; hiking, (19 percent); weight lifting or strength training (18 percent); swimming and team sports (both 12 percent); and tennis, (10 percent). Other activities named by less than 10 percent of those polled include skiing, yoga and Pilates, golf, martial arts and gardening.

"With thoughtful modifications to their exercise routines and compliance with medical therapy, most rosacea patients can continue to enjoy the benefits of physical activity," Dr. Harper said.